Mother's Day: How pregnancy taught me to be selfish and KASAD13

Mother's Day: How pregnancy taught me to be selfish.

It might sounds strange that motherhood and pregnancy taught me to be selfish. Isn't motherhood all about putting your child's needs first? Isn't pregnancy where another human being literally sucks the life out of you, to the detriment of the mother's health? Well, yes - let me explain.

I started vomiting the day I took a home pregnancy test, which was week 4 to the day. It was a very faint line, but I knew I was pregnant even if Dear Husband didn't believe me. I didn't 'feel' pregnant necessarily, but I knew that false positives are practically impossible when you're talking about home pregnancy tests. The next day I took another test and sure enough the second line was stronger and we were officially pregnant and overjoyed.

We started telling close friends and family, and we were planning on going public with the news (at work and on Facebook that is) at 12 weeks or so. The nausea and vomiting kept getting more persistant, but I figured that this was just par for the course. Dear Husband had a work trip to Sydney and I went with him, I was about six and a half weeks at this point. I remember spewing in the bathroom at the hotel feeling pretty awful, but none the less I thought that this vomiting was something special that I was sharing with my precious baby. Yes, I was thinking that as I was curled up over the toilet bowl. I had bought some ginger tablets and was trying dry toast, but they weren't doing much. I wasn't really fussed though, just enjoying being pregnant.

The night before we were due to fly home we couldn't check in to our flight online, nor could we check in the following morning. Thinking that it was a problem with the website we checked out of the hotel and got a cab to the airport, my trusty zip lock bags in my pocket just in case I needed to spew. When we got to the airport there were so many people queuing out of the terminal onto the footpath. I thought that it must have been so busy since it was the first day of NSW school holidays.

We got out of the cab and went to the terminal with our gear, and I stopped to vomit in the gutter. Very classy. I felt the need to explain to people that I wasn't hung over, just pregnant. Then we started to notice the news cameras and it became apparant that the website wasn't down and the airport wasn't just busy, then entire computer system for our airline had crashed across the country. Everything was having to be done manually, there was an enormous backlog and flight were being cancelled constantly.

After two hours in the queue on the footpath we made it into the foyer of the terminal. It was packed and we picked a spot near the rubbish bin which I spewed into several times. When our flight was cancelled, we knew we had to go. The line to get onto another flight was out the door again, the other airline was booked solid (and rubbing their hands with glee at all the extra customers, no doubt), the surrounding hotels were booking up fast and I had run out of sick bags. We knew that we weren't going to get anywhere that day and hanging out in a crammed airport with no hope of a flight out was not where I needed to be.

A few phonecalls later, some fortunate connections and a short cab ride later and we had one of the last rooms in one of the airport hotels. It was a tiny, tiny room - only just fitted in a double bed and the tiniest of ensuites but it was infinately better than the floor of the overcrowed terminal.

I promptly had a shower and went to bed. Dear Husband tred to get me to sip lemonade and eat small bit of bread, which worked for a while but before long I was vomiting uncontrollably. I couldn't keep down fluids and was vomiting bile constantly. Thank God we had left the airport when we did - I was so sick and I just kept going from the bed to the bucket to the shower. I'm so glad I didn't need to get though that without privacy, a bed and running water. In hindsight, I should have gone to the hospital, not a hotel, but we didn't know this then.

The next day we tried to call the airline but couldn't get through. We were only 1000km away from home - one long day of driving or two shorter days. We considered hiring a car and driving home, but we couldn't get a gurantee that the airline or insurance would pay for it. To be honest I don't think I could have done the drive anyway - vomiting into a bucket and then having no running water would have been awful. We stayed at the hotel for another night since at least we had a bed and a shower.

After two nights at the hotel we were able to get a flight home. I was supposed to be presenting at a conference that day but I had to call and cancel. Firstly I couldn't have made it there in time with the two day flight delay and secondly there was no way I could run a session in my condition. We went straight to the doctor who gave me an injection of metoclopramide (a common anti nausea drug) and I went home to bed.

Over the next week my nausea and vomiting only got worse. I had to fess up at work - it was so obvious what was going on. It was announced to staff while I found myself in hospital on a fluid drip. I remember being so upset in hospital, I felt so awful. I was thinking that I was only 8 weeks into my first pregnancy, and all I could see was the huge expanse of time in front of me. I couldn't believe how bad I felt, how awful this was and how long I had to go. At least the baby was safe, there was never any concern about her safety which was beyond wonderful.

I was diagnosed with hyperemesis gravidarum - literally 'extreme vomiting of pregnancy'. I tried metoclopramide tablets and injections, prochlorperazine suppositories, ginger, B6, seasickness bands, antihistamine tablets, eating small meals frequently and before I got out of bed but practically nothing worked. I soon found myself on ondansteron wafers. Ondansteron is a powerful antiemetic drug which works on the brain by stopping you from feeling nausea (rather than on the digestive system or muscles themselves). It's good stuff, but it's very expensive as it's not on the PBS (except for cancer patients undergoing chemotherapy.) (For those of you who don't know, in Australia most prescription medications are subsidised by the Pharmaceutical Benefits Scheme, which means that most scripts end up being about $20 or so, even though the real cost may be $100 or more. The price difference is funded by the taxpayer. Only a very small amount of the cost of ondansteron is rebated by private health insurers.) I was having to take one or two doses a day, at $15 a dose. The cost added up very quickly, and I had spent over $5000 out of pocket on ondansteron by the end of my pregnancy.

It didn't get any better, and in total I was hospitalised five times. I kept waiting for 12 weeks to see if it would get better, but no. I was waiting for 20 weeks, but no. After abou 25 weeks it did get less and I had no further trips to hospital but I was still taking the ondansetron daily - with that it was probably more like regular morning sickness for the last half of the pregnancy, I was only sick 2 - 3 times most days.

I was still working until 34 weeks, although I strugged every day. Physically and emotionally it was hard - very hard. All the talk about work/ life balance, and about priorities which you always agreed with and then went home and ignored because you had work that needed to be done - went out the window. I had to prioritise my health, full stop. It was the only way I could function. I had to do the bare minimum at work; sometimes less. I relied heavily on my colleagues. I had to look after my body - I had to take my medication, and nibble on food, and try to sip slushy drinks. I had to rest - constantly.

I had to rely on my family, friends and husband. I was not self sufficient, and I couldn't have been if I wanted to. I needed to ask for help and I needed to accept it. I couldn't bite off more that I could chew and then chew like crazy - I needed to say no. A lot. And ask for help. A lot. If I didn't, I would find myself in hospital again.

My precious girl was born six days post term at a very healthy 4.1kg (9 pound and half and ounce). Two weeks after Chubs was born, I was 12kg lighter than my pre-pregancy weight. After a quiet, slow fourth trimester I began to recover and to feel ready to rejoin the world. I have a lot more resilience now that when I was pregnant, and it's time to repay many of the favours that my friends, family and colleagues. Sometimes I need to burn the candle at both ends, and I don't always look after myself as well as I should as sometimes.

However, I have learned that my body is not to be taken for granted. It may be able to run on coffee and skipped meals for a few days, but not permanetly. I may be able to convince myself that I can cope on my own, and just choose to let people help me when it suits me, but that's not true - sometime I need other's help, and not just when I give them permission to help me. There is a limit to the sleep debt that you can run up - sometimes you need to leave work unfinished and go to bed. When it took me everything I had - and help from others - just to get through the days and weeks and months, I lerned to be selfish and look after my body. I can get away with not doing it now, but I try not to, at least not all the time.

So this is my Mother's Day message to you all - look after yourself. Your body needs you too. Just because you can go all day without a proper meal on four hours of sleep doesn't mean you should.

KASAD13 Snow and grass
This square uses boucle yarn which gives it a great texture which is great for knitting for kids. When using novelty yarns, remember that they are often synthetic and may not be very warm. This boucle was 50% wool so I felt it was ok to use as such a main part of the square, however eyelash, ribbon and furry yarns may be best only as embelishments rather than part of the 'warmth' of the square. 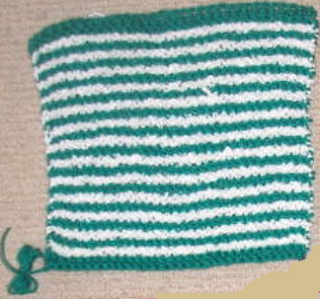 Return to all the KASAD posts

Linked
Posted by AsSnugAsABug at 06:00