As a science teacher and a responsible citizen, I believe that I have a responsibility to ﻿share reliable, accessible and factually correct information. Often I have been on the receiving end of a call or email from a friend asking me to explain something to them. Sometimes it's a news story about something science-y, often it's a medical diagnosis or concern and increasingly it's a question about climate change.
I was deeply concerned and disappointed when former Prime Minister John Howard launched Professor Ian Plimer's book How to get expelled from school: a guide to climate change for pupils, parents and punters in 2011. I was not upset because I fear debate, or because I fear change, or because I fear being wrong. I was upset because the book contains many, many innaccuracies and misleading statements.

To be honest, I do not understand why there is continual 'debate' about 1) if climate change is real and 2) if human activity is responsible. The peer reviewed scientific literature explains what is happening almost beyond a doubt. I say 'almost' because science never totally 'proves' anything. Science, but it's very nature, constantly reviews its ideas. A scientific explanation is accepted because it is supported by evidence. When someone comes up with reproducible, peer reviewed evidence to support another explanation (either a slight adjustment or a totally new idea), then science changes it's views; there are countless examples of this. The evidence for the cause of climate change and the role of human activity is extensive and well examined. The vocal 'human caused climate change deniers' (or whatever term is used) have not satisfied the burden of proof expected of any scientist. The primary place to challenge scientific ideas is in peer reviewed scientific literature, not on light entertainment news and breakfast shows.
Of course, many issues in society are not only scientific issues and emotion - for better and worse - plays a very important role in how issues are received, discussed and acted upon. However; climate change is not a discussion about marriage rights, or breastfeeding, euthanisia, abortion, religion, circumcision, welfare funding or any other highly emotional and controversial issue. There are many other issues which we are happy to accept scientific opinion on - the increased safety of seat belts, the physics of why an aeroplane won't fall out of the sky and how the internet works. I don't understand why there is such a fuss about why pollution is bad, and therefore less pollution is good.

The media also have a role to play in this confusion, but I will save my opinions on this for another day.

Professor Plimer's book included in it 101 questions to ask about climate science, and the Department of Climate Change and Energy Efficiency has given extensive, high quality, research based answers to each question which can be viewed here. I have included a selection below.

Is climate change normal?
The climate has changed - temperatures have risen and fallen  - throughout Earth’s history. Change in the climate can be driven by any force that causes the Earth to gain or lose heat, causing it to become hotter or cooler. Past changes in the climate have been caused by forces including volcanic eruptions, the changing location of continents and oceans, changing ocean currents, natural variations in the levels of greenhouse gases in the atmosphere, changes to the sun’s intensity, and variations in the Earth’s orbit around the sun.
However none of these forces can explain the climate changes we are now observing. Scientists have closely examined all the natural processes that can drive changes in the Earth’s climate and have found that none explain the current warming of our climate.
Scientists have shown, beyond doubt, that the current warming of our climate is being driven by human activities, such as burning fossil fuels and deforestation. These activities release additional greenhouse gases into the atmosphere.

What drove climate change before humans were on Earth?
Past changes in the climate have been caused by forces including volcanic eruptions, the changing
location of continents and oceans, changes to the ocean currents, natural variations in the levels of greenhouse gases in the atmosphere, changes to the sun’s intensity, and variations in the Earth’s orbit around the sun.
Scientists have studied all of the natural processes that can affect climate and have found that none can explain the sustained rise in global temperature that is being observed today. The observed current warming trend can only be explained by taking into account the impact of human produced greenhouse gases.

If the human body and food are composed of carbon compounds and all animals breathe out carbon dioxide, how can carbon be pollution?
As previously outlined in question 34, many natural substances can be pollutants when they are in the wrong place or in the wrong quantity.
The carbon we cycle through the food we eat and the carbon we exhale is part of the natural carbon cycle. Breathing does not add extra CO2 into the atmosphere. In contrast, the burning of fossil fuels does add extra CO2 into the atmosphere and this is disrupting our climate system. This is why CO2 is considered a pollutant

For thousands of years, prophets of doom have been telling us the world was about to end. It hasn’t, otherwise we would not be here. Why is it that we should believe the modern prophets of doom who tell us that our carbon dioxide emissions will destroy the planet?
This is a misleading and irrelevant question.
Climate scientists have never claimed that the world is going to end due to climate change. Instead, scientists have outlined the impacts of increasing CO2 from human activities. These impacts include increasing air and ocean temperatures, melting of snow and ice, sea level rise and increasing acidity of the world’s oceans.
Scientists have concluded that such changes in the climate will have significant impacts on our communities, economy and environment. For example, a study considering the vulnerability of Australia’s coastal infrastructure to sea level rise found that existing residential buildings valued at a total of up to $63 billion are potentially at risk of flooding from a 1.1 m sea level rise.

Why are there 60-year cycles of warming and cooling over the last 2,000 years?

This is a misleading and incorrect question (similarly to question 10), as there is no evidence in the peer-reviewed science for a 60 year warming and cooling cycle.
Professor Plimer suggests shifts in ocean processes every 25 to 30 years could cause this 60 year cycle. While changes in ocean processes can influence global temperatures, these processes move heat within the climate system and do not add additional heat to the system. For this reason, ocean processes cannot explain the observed increase in global temperatures.
There are many more questions and answers, and I encourage you to read the entire list for yourself. Whether you have a particular interest in science, climate change or you are just a responsible global citizen who wants to be informed, then I strongly recommend this resource and the other sources available on the page. 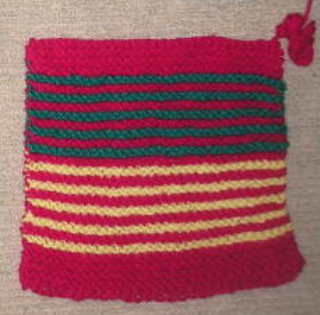 The colours in this one just 'pop' and again it's about a square which will knit up quickly and will allow you to play with colour.
Materials

Return to all the KASAD posts

Linked
Posted by AsSnugAsABug at 06:00