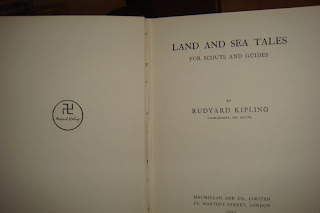 The picture about was taken by a Guiding friend of mine who has a passion for collecting books where ever she goes. This is a 1923 book, and she showed me the photo as we were both interested in the right handed swastika, especially its use by the Guiding and Scouting movements.


In her autobiography, Window on my Heart, Lady Baden- Powell talks of being given a thanks badge by B-P when they met in 1912 on the SS Arcadian cruise ship.
He gave me a Scout 'Thanks Badge' in the form of a swastika with the Scout fleur-de-lys superimposed. The right- handed broken cross or swastika (so called from the Sanskrit word for 'well-being') was an ancient sign of good fortune that had appeared in many civilisiations as far back as the Bronze Age. Later, when the Nazis adopted the left-handed broken cross as their symbol and it became synonymous with evil and opression, the Scout Movement abandonded the use of the swastika as a Thanks Badge, but in 1912 it was still a symbol of good.'

I also saw many swastikas when I was travelling in India (with Girl Guides) in 2005. The right facing one which isn't rotated was often used in art, as Lady B-P described, as a Sanskrit symbol for wellness. Obviously Kipling's extensive links with India are very well know too - more so than his links to Scouting.
The parallel between the swastika and its use by the Nazis and JK Rowling's use of the Deathly Hallows symbol is obvious. Indeed, the links between the Potterverse and Nazis are many. I have recently finished reading and studying The Boy in the Striped Pyjamas and it has affected me in a way which no other book ever has, and in the few months since I have read it it has never been far from my thoughts.
I have thought that the swastika and the Hallows both show us that there are good things which can be manipulated and twisted and associated with the worst, horrorific things. I am even struggling to communicate what I am trying to say here. The unthinkable awfulness of it all - to have been created out of something so happy and innocent - is just that, unthinkable.
However, the good still remains. The terrible acts do not erase the good which happened before. They change it forever, yes, but they can't erase the goodness completely. The swastika for many people now is a symbol of evil and everything which is wrong in the world, and as said above, the way it is used has been changed forever (both in general and by the Scouting Movement and Kipling). However, the good still remains, if only a speck. If only in Lady B-P's girlish memory of being courted, in a 1923 edition of a stories for children, or in a necklace worn by Xeno Lovegood to the wedding of his friends - a speck of goodness remains.
When there is darkness and sadness, look for the speck of good. Even the most horrible and evil happenings have a speck somewhere. It doesn't mean that it's not evil and horrible, but I need to know that a speck of hope and goodness can be found. I need to know that. Everything I am tells me that that tiny speck is there, and I hold on to that though with all my might.
Posted by AsSnugAsABug at 06:00