Well, in short - it worked! It's not often that I can say that about a baking endeavour. Yes, I know that I'm really stretching it to call this 'baking', but it's Christmas!

I didn't have too many dramas. It came as several pieces with a massive bag of fondant. It was more that enough, even after I made mistakes and slathered it on which was good. The leftovers may or may not have been eaten/ sucked from the bag later... 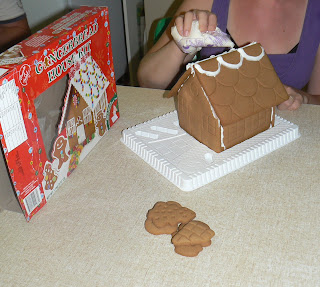 It was pretty easy to build, except for the 'hold in place for one minute until set' instruction. After an hour the roof was still sliding off and we discovered that this was made in Canada. I'm guessing that a Canadian Christmas and one in Queensland have a pretty huge difference in temperature! All was fixed with more fondant and a little rest in the fridge. 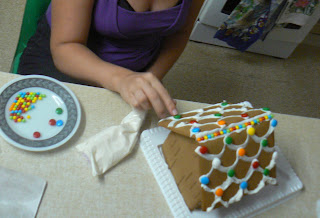 It was fun sticking it together. Because it was a kit I didn't do any planning, I just stuck on the lollies as I went. (Reckless, I know.) I'm looking forward to planning one in the future. Apparantly some people do themed ones each year, I'd love to do that after a couple of years. (By the way - this is definately an after bedtime or nap time project!) 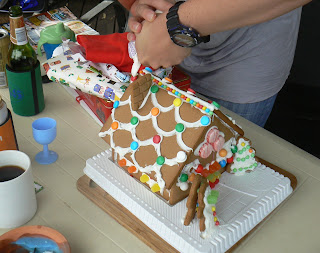 Some last minute renovations to the chimney. This is the only house I've ever had with one. 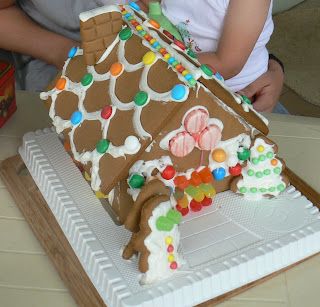 The finished product! Unfortunately after the night in the fridge some of the lollies were 'crying' but otherwise I thought that it looked really good. The kit also came with a snowman, a gingerbread man and a Christmas tree which you can see in the 'front yard'. 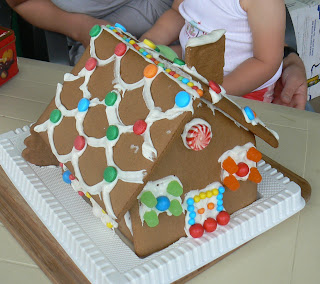 This is the back of the house. Much less crying from the lollies here! The middle swirly mint is what the three on the front of the house are supposed to look like.

This was the first one I'd made and I enjoyed it. I'd love it to become a tradition in our family. It's not something that Dear Husband or I have ever done in our families before. It's very hard for us to get excited about Christmas, but it's something that we really want to make special for Chubs. I'd love to have her 'help' decorate as she gets older, and for gingerbread at breakfast to be a Christmas time treat. (Incidentally, she loved the icing but had a mixed appreciation of the gingerbread itself.) I thought that the kit biscuits tasted quite nice, although I may change my mind after I've made one from scratch!

So, all in all, a successful venture, which makes a nice change!
Posted by AsSnugAsABug at 20:53