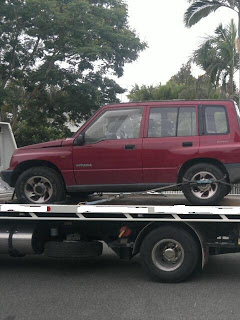 We said goodbye to our car today. I bought it seven years ago, not long after I met Dear Husband. We've had lots of fun adventures. Lots of four wheel driving (mostly beach), lots of road trips and lots of long commutes.

It was no spring chicken when I got it, and I certainly didn't treat it gently! Lots of ks and lots of sand.

It never had air con, was full of rust and the door handle kept breaking no matter how many times I replaced it. The muffler had busted and been repaired with a tin can before being replaced. The starter motor went one year over Christmas and we couldn't get a replacement in for a week or so, so we have to spend all week push starting it. I had to sit in the supermarket car park for half an hour with the car running while Dear Husband went in and grabbed some groceries. Every time it got a service ther was plenty of things which needed doing, but it was still an amazing car.

We only ever got it bogged twice, and not for lack of trying. It was a great zippy little beach car, and I would seriously consider getting another (newer) model in the future when we buy another 4WD. For many years Dear Husband and I were a one car family with it - even before we were a family. We drove around in that car while we were dating, through our engagment and first few years of marriage. We drove to and from all my pregnancy appointments in it and to the hospital when I was in labour. It was the car that we brough Chubs home from the hospital in.

We got a second car in the middle of last year, which has whizz bang features like air con, CD player, keyless entry, central locking, and doors that close properly. Oh, and automatic transmission - it took me a while to get used to that!

Still, my little red Suzui will always hold a special place in my heart. Unfortunately it has an electrical fault somewhere which we just can't find, and not for lack of trying. It was continually cutting out - would go months at a time with no worries, and then would cut out again. When we couldn't drive two suburbs over without calling a tow truck, we knew it was time to let it go to the big sand dune in the sky.

The tow truck contractor picked it up today to take it to the wreckers. We couldn't even get it started to drive it onto the truck. Chubs keeps saying 'car babble babble babble gone', with actions to match.

So, goodbye to my little Suzi. Thanks for the memories. I know that you were just a car, but you were a daily part of a wonderful time of my life.