There was a partial solar eclipse visible on Friday (full annular eclipse visible from Cape York.) Chubs and I made a very very simple pinhole viewer - a cardboard biscuit box cot in half with a 2mm-ish hole poked in it. I held it up so the shadow fell on a white folding chair. Here's the bit you'll have to trust me on. That teeny bit of non-shade that looks round? It was actually round, with a little bite taken out of it. That is, a partial solar eclipse. Because it was last minute it wasn't very big and the poor resolution on the tablet camera didn't show the 'bite'.

Still, it was good to see something that won't be visible in this part of the world for another forty years or so, and was a great follow on from the transit of Venus earlier in the year. 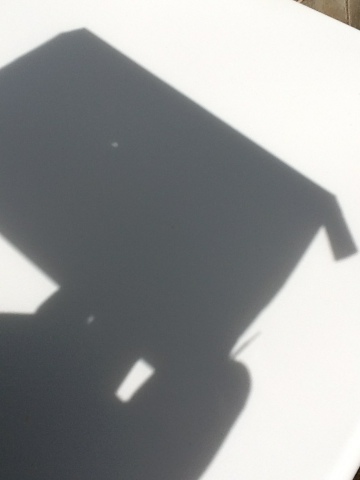