My five most useful non-baby items for a baby

As many people know, if you make something a product for a baby, then the price automatically skyrockets. Say it's for a wedding, and the same thing happens too. The more non-baby stuff that you can find, then probably the cheaper it will be. 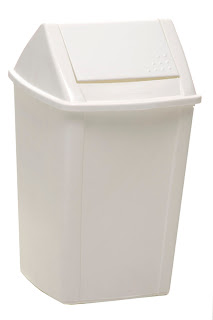 We were able to get two swing top rubbish bins for Chubs' change table (more on that later). One is for disposable nappies (diapers), wipes and rubbish. The other is for cloth nappies to be washed. We picked up three of these 40L swing top bins (two for Chubs' room and one as a new kitchen bin) for $10 each at the cheap shop. Specalised nappy wrappers cost $50 - $60. Sure, they wrap the nappies up into giant long sausages, which do contain the smell a bit - but so does throwing out the nappies. I'm a bit of a cheapskate frugal, so just emptying the bin every two days is much more my style. Refills for the nappy wrappers are $20ish dollars each, too. In our non-baby bins we just put regular large plastic shopping bags or regular bin liners. Also, from an environmental point of view, I think that the less plastic wrapping the going-to-take-forever-to-break-down-anyway nappies and poo, the better. 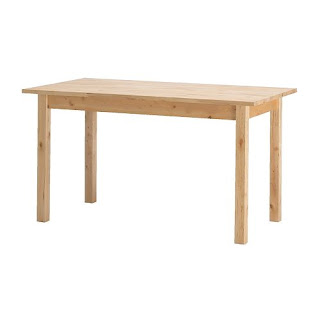 I bought two of the above dining room tables when I was in a share house at university. That was eight and a half years before Chubs was born, and I jokingly thought then that one could be my first born's change table - which is exactly what happened. One of the great things about these two tables was that the legs screwed off, which meant that one of the tables had been our dining table, and the other lived legless behind the couch. (The couch that I often lay on when I was legless, a long, long time ago :) .) The second table now lives in Chubs' room. A foam change mat in the middle, nappies and wipes on one side and space for a change of clothes, yesterday's jumper, a toy to play with/ throw at Mummy's head etc live on the other side.

The best part, however, about this table is that underneath it is storage. Since Chubs' room used to be the study/ guest room/ Room For The Storage Of Crap, that space is significantly reduced now. Although we tried to get rid of much of our stuff (and somewhat did this) I'm still desparate for storage space. Underneath the change table is an empty nappy box which is the 'pantry storage' for unopened wipes/ baby shampoo/ swim nappies etc and the bulk sposie nappy box. Also is our suitcase when not in use, my sewing machine and overlocker, a file box of important documents and our printer. I love having all this under the table, hidden away with a pretty tablecloth I already had. (Actually I think I bought that tablecloth the day I bought the table.) We were actually given a small baby-specific change table, but I love having this big one instead, and the dining table cost less that the specalist change table whould have if we had purchased it new. 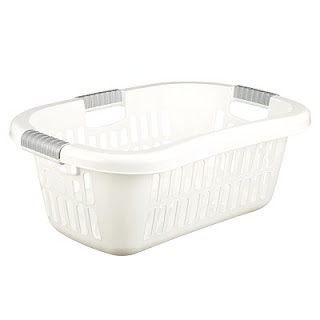 The poor man's Bumbo. From when Chubs could just sit up we worked out that we could put her in an empty oval washing basket. Not only could she lean against the back, but the sides stopped her falling to the side. We could also pop a few toys in on her lap and they wouldn't roll away. It got to the stage where visitors came over and we would put her in there without a second thought - only our visitors thought that it was a bit strange, and then they realised how well it worked for us! 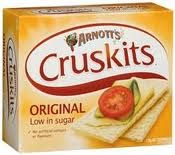 From when she first started solids, Chubs has LOVED chewing on a crispbread biscuit. I gave her one one day when we had run out of rusks, and the next think it was half gone. I looked for where the broken bits had gone (since most of her food was ending up on the floor at this stage) but I couldn't find it. I watched her more closely, and I realised our precious girl was sucking on the crispbread until it got soft, and then was smooshing and swallowing the mush - clever girl! My husband and I now call them magic biscuits. A crispbread when she's strapped in the stroller, the high chair or the bouncer usually buys us ten minutes to do what we have to do. So don't feel that you're limited to the baby food aisle to feed your baby. 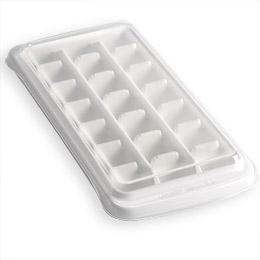 Although I was/ am a frequent expresser, I've managed to avoid special breastmilk storage bags and containers. Breastmilk is fine to be frozen in normal ziplock sandwich bags - these are food grade and much cheaper. Just turn upside down, snip off one of the bottom corners when the milk is defrosted and pour into the bottle/ sippy cup. I also never found the need for special freezing containers - regular ice cube trays with a lid (or with cling wrap/ alfoil over the top) work just as well. You can then pop the 'milk cubes' straight into the bottle or defrose to add into solids.

So feel free to think outside the baby box when using things for your bubba, it might just be more useful and probably much cheaper. What are your best non-baby baby items?
Posted by AsSnugAsABug at 22:03