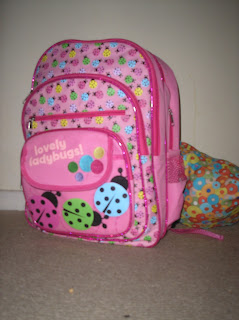 One of my more frequent Google search term hits is 'daycare packing list', so I assume that this is something that people are looking for! The list has changed a bit as Chubs has grown - here's the list when she first started daycare at eight months, and another at 11 months.
Having this list is very important to low stress mornings. I don't like to be rushed in the morning -it creates a set up for a bad day. Lunches are done the night before and all her clothes to wear for the week are set out on the weekend. Because we have this structure, I know that things will still happen as they should if I'm brain dead - like I am most mornings. We also leave with plenty of time so that if something does go wrong, there is wiggle room.
The biggest difference ﻿with the current lists (18 months) is that I no longer need to pump at work - woooooooohooooooooooo!!!! Not pumping at work (but still breastfeeding) is the best of both worlds - a million times easier for me during the day, but still all the nutritional, comfort and immune benefits for Chubs. With all the daycare germs that float around, she needs all the antibodies that she can get! This is perhaps one of the best things about breastfeeding a toddler - most of the hard work has been done already. For a while I was still sending a bottle of soy milk (since she won't drink cows' milk) but when Chubs stopped drinking that I stopped sending it :). Chubs used to eat breakfast at daycare but now she has that at home so I don't send it.
Our daycare centre doesn't provide nappies (diapers) or most food. (They do provide fruit at morning tea.) Most of the parents send in a box of disposable nappies at a time so they don't need to be packed each day, but since we use cloth that doesn't apply to us.

- Sheet bag – top sheet, bottom sheet, bunny rug, cuddle blankie. Goes on Tuesday, comes home on Friday and usually gets washed on the weekend. Chubs has a cuddle blankie which is just for daycare, so it stays in the bag.

- Drawstring with nappies and wetbag. I usually send Tuesday and Wednesday's nappies in on Tuesday, and then send more on Friday. I count for six per day )plus one wetbag per day) but she often doesn't use them

- Spare clothes - Chubs often uses these so I send two sets. Usually a pair of shorts and a pair of leggings so that there is a choice for the carers depending on the weather, plus two shirts and a jumper. These only need repacking if they have been used. Having two sets also buys me some forgetting-wiggle-room.

- 3 disposable nappies - spares in the bottom of her bag in case she runs out of cloth. Wosrt case scenario, they have spare nappies at daycare so she wouldn't need to go bare.


Mummy work gear
Night before
- Lunchbox
- Book bag
- Anything else?

Morning of- Computer
- Keys + nametag
- Lunchbox
- Anything else?
Posted by AsSnugAsABug at 06:00