Before I start this post proper, I would like to start this post with what I usually say when I talk about formula advertising. This is in no way, at all, in any way, a critism of how parents feed their children.

Yes, I'm a big breastfeeding fan, however, how someone else chooses to feed his/ her child is not my concern. Yes, I think that breastfeeding (or not) has public health implications, but so do many other things. Someone may write a blog post explaining why exercising regularly is great for the health of your family, and what the risks of not exercising are. Someone else may tell me about their experiences with in home/ family day care, and about how it meets the needs of small children better than other forms of care. Someone else may write a blog post about how car manufacturers encourage dangerous driving by making speeding look attractive, which may encourage reckless driving behaviour. None of these things mean that I am a bad person because I don't go to the gym, I send my daughter to a daycare centre and I have a red car, nor do I think that that is what these hypothetical posts intended.

This post is not several things too. It is not anti formula. It is not passing judgment on how someone feeds their child, it is not meant to be advice, it is not 'telling off' formula feeders. Kick me out of the "yay boobies" club if needed, but I don't think that using formula is something which demands a defence or explanation to random strangers or society at large.

This post is several things - it is a brief commentary on unethical advertising, it is an attempt to raise awareness about these tactics and it is an act of advocacy. With this post, perhaps one more seed of change will be sown. It may take many years, probably decades, but perhaps this post can be one tiny part - though a part none the less - of this change.

Recently a landmark decision was made in the Australian High Court which is of international significance. (Before I go on, I am in no way a legal expert beyond a fondness for big words, so please forgive my lack of understanding of detail and feel free to correct me if required.) The Australian Government introduced legislation which would force cigarette packets to have plain packaging. Plain packets, no logos or pictures (except for the graphic warning label) or colours or fonts - just a plain packet with the brand name printed and the information about the type and number of cigarettes and so on. It is my understanding (and again, my legalese is very minimal) that the tobacco companies fought against this legislation on the basis that it infringed on their intellectual property rights and that such legislation was not permitted under the constitution.

The good part? The tobacco companies lost. The best part? They had to pay the Government's legal costs, too.

It got me thinking about unethical advertising, and in particular about how similar the sneaky techniques of tobacco companies are to formula companies. 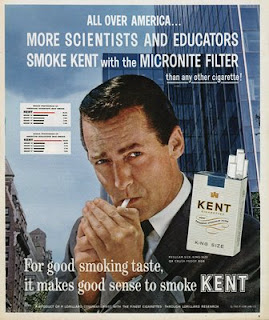 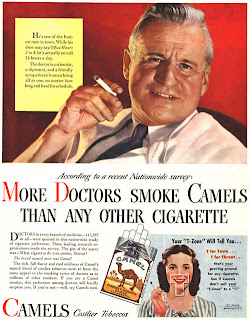 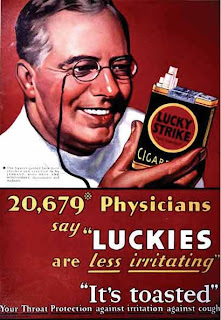 Nope, me either. That is, I remember seeing them in books and blog posts, but as items relegated to the dark ages of pop culture history. I think how amusing it is that cigarettes - perhaps the worst health invention ever - were being advertised as healthy. The worst aspect of the health issue is the respiratory system, and that's the very thing that the advertisments were saying how great cigarettes are - smooth on the throat. Throw in some puffed up professional expert endorsements (like physicians and scientists) and a good drag of pseudo-science and you have an addictive and attractive advertising campaign.

At least, I think it's amusing, until I remember that this actually happened to real, actual people. It's not so amusing, then. It still seems far fetched, though. As a child of the 80s I can't imagine that people actually believed the ads that said that cigarettes were healthy.

Of course, I realise that times change. The high court decision about the tobacco advertising got me thinking - in fifty years time, will the idea that formula was marketed as a health product seem unbelievable? I hope so.

When I was a child the idea that cigarettes were health was long gone of course, although cigarette advertising wasn't. I can't remember ever seeing any cigarette ads on TV, but I remember seeing lots of logos on billboards and lots of sports sponsors. I recall the Windfield Cup and logos adorning atheltes and sporting fields alike. I saw a story on TV about a couple (I think - I was small and it was a long time ago) who ran an informal coast guard service or something; paid for by advertising 'Winfield' in glorious red and white on the side of the boat. The couple were concerned that the (then) soon to be introduced laws banning cigarette advertising would mean that they would lose their funding for this community service. There was an advertising campaign a few years ago against plain packaging - poor, hard working corner store owners couldn't afford to have reduced (cigarette) sales so we should get plain packaging.

None the less, cigarette ads were banned, and now we have this landmark plain packaging. I think it's a huge step in the right direction. If one of the claims against plain packaging "it won't work so why do it" was true, then why were the tobacco companies so worried that they went to the extreme cost of mounting a high court claim? If they weren't really, really worried, then why bother? Now, back to formula. Some would suggested that likening formula advertising to tobacco advertising is ove the top, but I don't think so. The issues of advertising is even more of an issue with formula - formula is a legimate product which is very much needed. Yes, only by a small number of people in a small number of circumstances, but needed none the less. One could reasonably argue that cigarettes could or should be banned completely; not so for formula. As even the rigid breastfeeding supports will claim; when a baby is hungry, he needs to be fed. When the first three options (breastfeeding, expressed milk from mother, expressed milk from another mother) are not available/ practical/ possible, then formula is essential, life saving and vital. The amount of formula sold is obviously well above the amount that would be needed to meet those cases, and I believe that unethical advertising has a lot to do with that. The WHO Code states that no advertising should occur to parents or the general public, including information services such as baby clubs. However, despite Australia being a signatory much of the Code is not enforced under Australian law. A great deal of advertising also sneaks in as permitted through the gaping wide loophole that is toddler formula. Everywhere these days, the 'health benefits' of formula are advertised. The token 'breast is best, consult a health professional' is there - but not on the toddler formula, since it doesn't have to be. Some pseudo-science and a few expert endorsements and it's like we're looking at a 50s cigarette ad. "NAN Pro 3 with Bifidus BL is also sucrose free which is great news for little teeth!" here Similac® Advance®

Give your baby complete nutrition for the first year
Similac Advance has EarlyShield® and is designed to support your baby’s developing immune system, brain and eyes, and strong bones. here Aptamil® Gold+ 1 Infant Formula nutritionally supports the developing immune system. A well-supported immune system is important for your baby’s growth and development. here
What is ImmunocareTM? Well, I've got no idea. It's trademarked, and it comes on a shiny gold shield, subconsciously protecting my child from all those nasty daycare germs, but how it actually works or what's in it? No idea. Breastfeeding support the child's immune system by helping the child to build passive immunity to diseases that the mother has come in contact with when the mother's antibodies pass in her milk into the baby. Stuffed it I know what ImmunocareTM does."Nutritionally supports the immune system" - so, it's about nutrition, not the immune system at all. Hmmm...
The High Court decision got me thinking about plain packaging formula. Of course, all formula advertising would need to be banned first (including retailers and toddler milk) - and it would take much, much greater legal minds than mine to tell me if the High Court decision could set a precedent in any way for a plain packaging formula push.
Is it too much to hope that the immune-caring benefit of formula eventually goes the way of cigarettes which soothe your cough? The health of our future depends on it.

Linked
Posted by AsSnugAsABug at 22:04