Roast beef - in pursuit of perfection

I think I have the roast beef - or more precisely, the roast veggies - worked out. 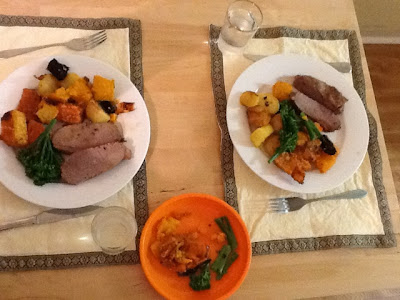 For the last ten - 15 minutes I turn the oven up to about 230 to help things really crisp up.

I've been buying the roast in marinade and will continue to do so for the time being.

- Veggies
Veggies need two hours, at 200, plus the 230 blast at the end. What I do now is put the veggies on two hours before we want to eat, and then add the meat later depending on how large it is

I've been scoring them with a fork and covering with flour and olive oil (not avocado oil like I was doing) before cooking. This really crisps them up.

Some steamed greens are needed and a nice touch - green beans or broccolini. I've been setting the timer for the last 15 mins, turn the oven up, do the greens, put the plates in the oven, set the table etc which works well.

I need to cut up less veggies. As wonderful as all those crispy potatoes and sweet potatoes are, it's not good for portion control when we're struggling to finish them. We aren't really keen on bubble and squeak so left over veggies tend to go to waste. Left over meat is planned and used in salads, but not the veggies.


After several attempts, I now feel that I have the roast down as a 'regular' - the sort of meal that I could make half paying attention. I know what sort of quantities to buy, what time frames are needed, what to do about leftovers and so on.