Well, in short, it was a success!

I used this recipe with some modifications

- 380g of chicken breast instead of 600g of chicken thighs
- 1/2 capsicum
- Half a 400g tin of butter bean instead of lentils
- A slightly different tin of soup, although that's probably a branding thing
- Brown rice instead of couscous
- no coriander

I did sear the chicken in the pan but probably won't bother next time. Hubby thinks that some mixed herbs would help, and I think I could just use one cup of chicken stock. I put in on for five hours on high and it was probably a bit overcooked. I tried to skip the flour because we didn't have any but it really was runny so I went to the shop and got some to thicken it up a bit.

Not sure how it will go if I double it and freeze. We got more than we needed - hubby went back for very rare seconds and there was still a serve left, so if I increased it by 50% we would probably have the prefect size for two servings for our family.

The neighbour even commented on how amazing the smell was which was the first time ever something like that has happened!

Stay tuned as I tweak further... 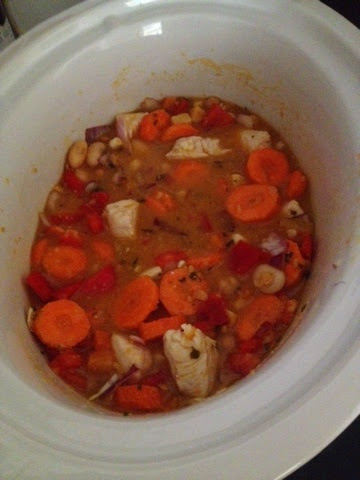